skip to main | skip to sidebar

My forthcoming apocalypse novel Last Day is now available for pre-order on Kindle. This will be one of the wildest books I've written to date. It's full-tilt crazy.


The last day of the world starts out like any ordinary day. Everything seems normal. Then news breaks of an imminent killer asteroid strike and everything changes forever. With the human race facing sudden extinction, the world descends into chaos. Now that no one has anything to lose, hidden horrors are unearthed and brought to the light. Serial killers and other predators no longer have to hide, indulging their dark appetites without fear of reprisal. The seemingly meek reveal inner monsters and go on killing sprees. The world is engulfed in carnage and blood flows freely in the streets. A few seek to rise above the madness and find a way to do the impossible--survive the end of the world. 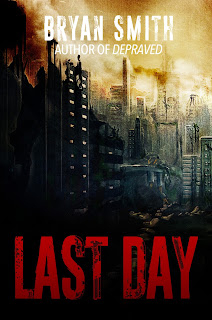 Posted by Bryan Smith at 2:52 PM No comments:

My new novel, 68 Kill Part 2, is now available in Kindle and paperback editions.

And if you haven't seen the kickass movie based on the first 68 Kill, which is directed by Trent Haaga and features Criminal Minds star Matthew Gray Gubler in the lead role of Chip, it is currently available from most VOD services, including On Demand from most of your local cable outlets.

Here it is on Amazon:

My collection of brand new stories is now available on Kindle.


SEVEN DEADLY TALES OF TERROR collects six brand new stories from the acclaimed author of DEPRAVED, 68 KILL, and SLOWLY WE ROT, plus another story that has never previously appeared in ebook format. Take a stroll through a nightmare landscape populated by serial killers, vampire nuns, demons, werewolves, and regular people forced to make hellish choices. Includes an introduction by the author.


Ten years ago on Christmas Eve, Silas Herzinger donned a Santa suit and took an axe to 15 members of his extended family.  Luke Herzinger, his youngest son, was the sole survivor of the infamous Herzinger Family Massacre.  Now, after a decade away, a despondent and suicidal Luke has come home to face his past and battle the evil that still resides in the old family home on Haunted Hill. 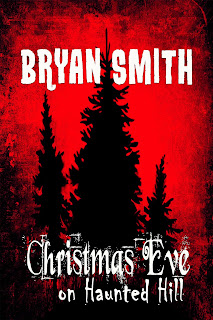 Here's some news I've had to sit on for quite some time. My novel 68 KILL is becoming a movie to be directed by Trent Haaga (director of CHOP and screenwriter of CHEAP THRILLS and DEADGIRL). Brought to you by Snowfort Pictures, the people responsible for WE ARE STILL HERE, CHEAP THRILLS, STARRY EYES, and numerous others. Trent's script is fantastic. The movie will kick ass.

Announcement link and story text from Bloody Disgusting below.

"One of our favorite genre director-writer-actors is casting up his next pic.
Trent Haaga, who previously directed Chop (pictured), and wrote Deadgirl, as well as the genre festival hit Cheap Thrills, is in pre-production on 68 Kill, says ScreenDaily.
Based on the crime novel by Bryan Smith, “the film centers on a hard-working guy who can’t say no to beautiful women which lands him in trouble when he agrees to steal $68,000.”
Shooting is set to begin in March 2016, with casting currently taking place.
Keep up with all of our AFM news as it breaks."
68 KILL announcement at BLOODY DISGUSTING

My new Halloween-themed horror novel ALL HALLOW'S DEAD is now available in both Kindle and paperback editions.

ALL HALLOW'S DEAD on Kindle


It’s Halloween week in Willow Springs, TN, and a mad slasher is on the loose!  Twenty-five years ago, a group of local boys did a very bad thing.  Now a masked killer is leaving a trail of corpses and bloody pumpkins all over town.  Brutal vengeance against his former tormentors and thirty-one dead for Halloween are the madman’s demented goals.  As the body count mounts, local law enforcement scrambles to track down the seemingly unstoppable killer and bring the carnage to an end. 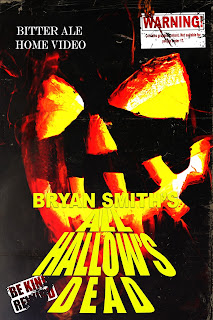 Posted by Bryan Smith at 9:54 AM No comments:

Tale of a Mystery Solved

Back in my mid teens a local station used to show surprisingly graphic horror films in the wee hours on Sunday night. I'm talking the very early 80's. 1980, 1981, no later than that. So much time has passed that I couldn't tell you the names of most of those movies. But they were definitely above and beyond what was the standard for broadcast TV back then in terms of violent and sexual explicitness. This was before cable and satellite TV came to my neighborhood. We only had five stations, including the three major network affiliates at the time, the PBS station, and the independent WZTV (now a Fox affiliate). The latter was only a few years old at the time. Logic would seem to suggest the station airing these movies was WZTV, but I'm not positive about that. Some nagging sense at the back of my head makes me feel like it was actually one of the network affiliates. But who the hell knows, really? This was most of my life ago, after all.

Anyway, for decades the only one of these movies positively identified in my head was something called THE NIGHT ANDY CAME HOME. This was a good movie better known under its alternate titles DEAD OF NIGHT and DEATHDREAM. But there was a scene from another of these late night movies that seared itself into my consciousness and has stayed there ever since. I always had the vague impression that it was a vampire movie, but in later years I was only ever able to remember this one scene. In the scene, the bare back of a beautiful woman is shown in a dark setting. Another beautiful woman leans over her and bites her on the neck. A single trickle of red blood then slides down the bare back.

There's a very strong likelihood that one little scene exerted a subconscious influence on the more erotic elements in my own horror tales. As I said, however, later on I could never remember what that movie was or anything else about it. I would frequently ask people about it. No one had a clue. When the Internet came along, I posed the question in various forums, figuring some genre junkie would finally solve the mystery for me, but no one ever did. Most people suggested various early 70's Hammer and Euro horror films as possibilities. Turns out these people were on the right track, at least.

Recently I did a lot of movie browsing and shopping on Amazon, with a focus on obscure horror films from the 70's and 80's. As part of this, I watched a lot of trailers on YouTube. Some of the movies are even available in full on YouTube and I skimmed through several trying to get a feel for what they were like. In the process of doing this, I stumbled across the scene that has haunted me all these years and decades.

The movie is THE BLOOD SPATTERED BRIDE from 1972. There's a relatively cheap DVD edition on Amazon. Oddly, the full film is also available as one of the extra features on the blu-ray of DAUGHTERS OF DARKNESS, another cultish piece of early 70's Euro horror.  I bought the DVD and the DOD blu-ray, because I'm weird like that.  Anyway, this isn't exactly an unknown movie in horror circles. In retrospect, I'm a bit stunned that none of the horror junkies I queried over the years were ever able to identify it for me. But that's beside the point.  I watched THE BLOOD SPATTERED BRIDE last night and was pleased to find I quite enjoyed it. It's wickedly subversive, particularly for its time period.

In closing, it feels a bit weird that a mystery that endured this long should end in so random a way, but I won't argue with it.
Posted by Bryan Smith at 12:33 AM 2 comments:

Bryan Smith
TN, United States
Author of several mass market horror novels from Leisure Books, including House of Blood, Deathbringer, The Freakshow, Queen of Blood, Soultaker, Depraved, The Killing Kind, and The Dark Ones. Most of my more recent books have been published under my own imprint, Bitter Ale Press. These include Slowly We Rot, 68 Kill, The Reborn, Strange Ways, and several others. Bestselling horror author Brian Keene has called Slowly We Rot, "The best zombie novel I've ever read." 68 Kill was adapted into a motion picture starring Matthew Gray Gubler. The film was released in 2017 and won the Midnighters Award at the SXSW film festival.